I've been busy like a bee, ironically making bee's and flowers for my upcoming garden shows in June. The first show will be June 11th at Oshawa's Botanical Gardens on 155 Arena Street for the Annual Peony festival, so I'm also making my infamous triple peony flower beads. I had a bit of a panic because last year when I came up with the design, I cannot find any of my notes or I didn't have any notes, but I also didn't even have any cane leftover either. Now, my memory isn't as sharp as it was even 10 years ago, but I did manage to jog it in a bit of an oh no panic induced moment. I actually remembered, and all is well because last week I made three or four of them. Thank goodness! It serves me right for not writing down exactly what steps I did. I used to write down everything when I worked for a publishing firm, but now being self-employed where time is even more money, how could I forgot, or at least, I think I forgot. So without further ado, I present round one of my bees with stingers and all. 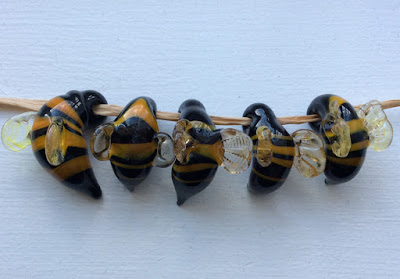 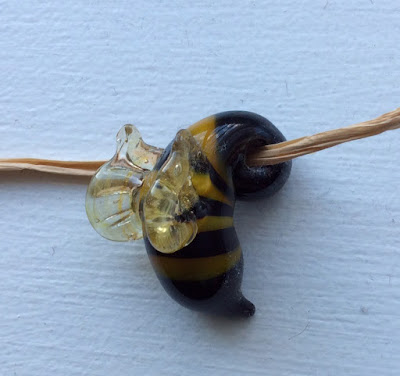 I placed them here in the same order that I made them, starting from the left and going to the right. They look similar, but in fact, there are differences that I'll explain here. In my humble, they seem to go from pretty good to nicer and the nicest one is photographed alone here so that you can see it closer up. At first, I just made a simple pair of wings with clear light amber, but later on I progressed to something fancier with transparents again but also thin lines of opaque yellows. With the first one, I was concentrating more on the technique of the whole bee as opposed to working on the wings and just to see if I could even do it. Later on I made the wings a bit fancier. I think they turned out to be a good representation of a real bee. I also started with a much larger bodied bee and as I got better, I further refined and the smaller they became. I'm quite happy with the result and hope you will like them too. Next will be stage two and finding a great way to hang them on a sterling silver chain, or perhaps if I can get them even smaller I can foresee a lovely pair of bee earrings with the stinger that gives them a bit of an edge.
The other June show will be The Artists in the Garden Show on June 18. It is a lovely show and a wonderful fundraiser.

Posted by Jeanette at 6:34 PM No comments: